Within the context of the work undertaken by CyberThinc Limited, the mathematical modelling process involves the initial development of mathematical models, and then the use of computational techniques to develop solutions, using either programming languages such as C, or code written in the Matlab language and run using the GNU Octave Mathematical software.

The techniques used by CyberThinc Limited are as varied as the types of mathematical modelling, and range from Game Theory, Iteration techniques such as Euler and Runge-Kutta, Weibull Distributions to Markov Chain Monte Carlo Methods and Karhunen Louve Transforms

The quality / integrity of a mathematical model is dependent on how closely it aligns with real world results from tests and experiments, and this is an area where we we very keen to ensure thoroughness. It is sometimes the case that a mathematical model will not coincide with reality, and this in itself can provide important insights into how a theory or hypothesis may not be correct, and may require changes. 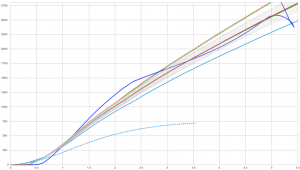 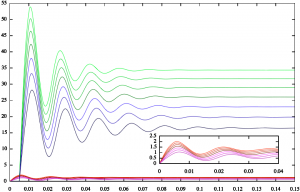 The output from a mathematical model written in C by CyberThinc for a client – This is to model the stability of a device by approximating the solution to a 1st order differential equation using Eulers’s iterative method.